Posted on October 9, 2014 by toetappernyc

We’re starting a series called “My First Time” where authors reveal how they landed their first book deal. To kick off, Aliza Sherman (founder of Bookgirl) shares her experience as a first time published author. Technically, her first book deals were Working Together to End Domestic Violence in 1996 and Everything You Need to Know About Placing Your Baby for Adoption with Rosen Publishing back in 1997, but here she talks about her first book deal with a major publisher.

Bookgirl: How did your First Time happen (how did you get your first book deal)?

Aliza Sherman: While I was running my company Cybergrrl, Inc., I was getting a lot of media attention for starting the first woman-owned Internet company.  The Wall Street Journal did a profile on me. Suddenly, book publishers were calling.

The irony is that they were the same book publishers who had recently rejected a book proposal submitted by my book agent for a book about women and the Internet. I chose to go with Ballantine because I really liked the editor who was around my age and very bright. She was great to work with as well.

Bookgirl: What was your book about?

Aliza Sherman: The publisher charged me with writing a guide to show women how the Internet could be useful to them. Remember that in the mid-1990s, women still didn’t make up even half of the population using the Internet. At that time, it was hard to convince many people—including many women—that the Internet could be remotely interesting or useful. I interviewed dozens of women who were using—and benefiting from—the Internet and interspersed their stories in between very basic explanations of Internet technologies at the time like Gopher, ICQ, and Commercial Online Services. Yes, that long ago. Of course, by the time the book came out, the Web was catching on. 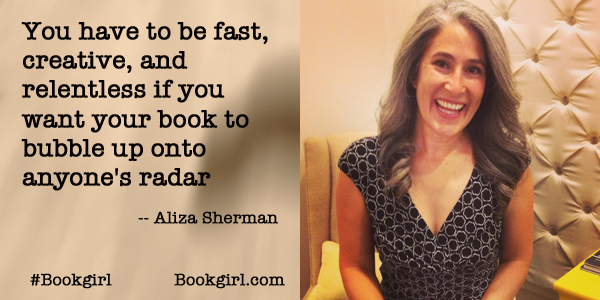 Bookgirl: What is a big lesson you’ve learned about publishing over the years since your First Time?

Aliza Sherman: My first big book deal with Ballantine was ideal in many ways—except when they were suddenly acquired by Bertelsmann Group and everyone I knew left the company. Up until then, however, I had a pretty ideal situation as a first-time author at a big publisher. They paid for five cities of my six-city book tour, booked my travel, chauffeured me around in Town Cars, arranged my lodging at nice hotels, fed me, and scheduled dozens of interviews for radio, TV, and print. I was spoiled!

What I learned over the years is that book publishing is a very “what have you done lately” business, and if you don’t have a mega hit, each time you sign a new deal, you’re back to square one. I also learned that book publishers are a great distribution vehicle for your book, but unless you’re one of the few select authors that they decide to spend money and attention on, you are mostly on your own in terms of publicizing your book. You have to be fast, creative, and relentless if you want your book to bubble up onto anyone’s radar—and have a strong list, following and fan base.

Stay tuned for more in the My First Time series.